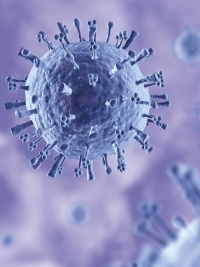 The classical “swine influenza viruses” (influenza subtype A/H1N1) were first isolated as long ago as 1930. The infection rate among pigs was and remains high, but mortality is low. The most recent pathogen now attacks not only animals, but also humans - and can be transmitted from human to human. It first appeared in Mexico, which is why the “new influenza” or “swine flu” is also referred to as “Mexican flu”.

National and international health authorities use the term “new flu” or “new influenza”. Among the current respiratory diseases in humans caused by the swine influenza viruses, the WHO has identified the variant of the subtype A/H1N1 called “virus type influenza A/H1N1”. The symptoms closely resemble those of flu caused by the known seasonal influenza viruses. Basically it is impossible to predict which influenza virus type will develop from a seasonal flu into an epidemic (locally limited outbreaks) or an influenza pandemic (worldwide spread). History shows that the curse of influenza can vary in severity. An influenza epidemic can cause many more severe and even fatal cases of disease than seasonal flu. Especially at risk are the elderly, sick people and children - a healthy immune system can successfully fight even severe influenza.

Infection with the pathogen of “new influenza” usually occurs in the same manner as with a seasonal flu virus, namely from human to human by droplet infection or by smear infection in which the virus is spread by the hands coming into contact with contaminated objects or surfaces. The Robert Koch Institute recommends hand and surface disinfectants with a “limited virucidal” spectrum of action designed to interrupt the chain of infection.