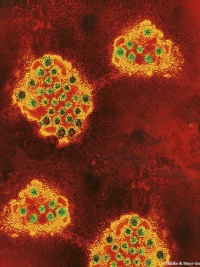 Only 26 to 35 millionths of a millimetre in size – but nevertheless the main cause of non-bacterial gastrointestinal infections worldwide: noroviruses!

The consequences of an outbreak of the viral disease are ward closures and even a freeze on hospital admissions owing to high staff sickness rates. This results in a serious shortfall in primary care and causes enormous economic damage. The virus is spread either by the fecal-oral route, if the viruses are within the stools, or via droplets within vomit. The contagious period starts a few hours before the first symptoms appear and can persist for another 7 – 14 days after the symptoms have subsided.

After an incubation period of 10 – 50 hours, the body reacts with diarrhea and vomiting to “rid itself” of the viruses. Since there is no known treatment that acts directly against the virus, all measures are directed towards treating and compensating the fluid loss. The number of outbreaks has increased 20-fold over the last six years and has now reached more than 200,000 cases annually. The number of unreported cases is estimated as almost three times higher. In addition to sporadic individual cases, outbreaks on a considerable scale occur in communal facilities like hospitals and rest homes.

The main difficulty presented by norovirus outbreaks is their explosive spread both among patients and medical staff. Direct person-to-person transmission is the main route of infection with norovirus, but food and surfaces can also be contaminated and therefore become carriers. Since noroviruses are particularly resistant, they can remain infectious on surfaces for over a week. The risk of recontamination is therefore particularly high with these viruses.