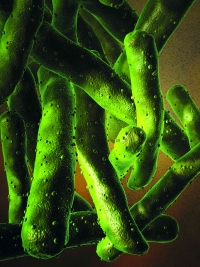 Tuberculosis (TB) is an infectious disease that usually affects the lungs and is caused mainly by Mycobacterium tuberculosis. The greatest cause for concern in this connection is the spread of TB strains that are extremely resistant to medication. More than 2 million people around the world die each year from tuberculosis. At present, mainly Eastern European and African countries are affected by the disease; the German-speaking countries have declining infection rates.

However, there is a heightened risk of transmission due to constantly increasing foreign travel. Infection with tuberculosis is usually the result of droplet infection, in which the TB pathogens penetrate through mucous membranes, open wounds or even fresh tattoos (as a result of contaminated ink). The probability of contracting tuberculosis infection is many times higher if HIV infection is already present.

The spread of extremely drug-resistant XDR tuberculosis strains has increased considerably over the last few years. They can now hardly be controlled by medicinal means, i.e. antibiotics. Resistance to medications, however, does not mean that there is also resistance to disinfectants.

Careful disinfection in the daily clinical setting is therefore of great importance today and is a particularly effective and controllable measure for preventing and interrupting chains of infection.